Imagine the tranquility and peace found lying in the lap of Mother Nature, camped up by some of the most beloved rivers in India. With clean air, clear spirits, bright days, starlit evenings and serene surroundings, imagine the beauty of it all. And imagine the rush of adrenaline as you run down some of the strongest white water rapids fed directly off a Himalayan glacial melt…Imagine!

River Rafting, is now a global favorite for those exploring options for a grand adventure in India! The backdrop of the Himalayas not just offers an excellent playing field for serious mountaineers, climbers and trekkers, but also excellent opportunities for kayakers and river runners. The melt from age old glaciers down the drains and eventually into streams and rivers has formed some of the best runs for rafting expeditions in India.

In the pic: The beach at Camp Ganga Riviera, by The Ganga

Homestays in Ladakh are an excellent way to interact and understand more about the local culture and the daily lives that the people lead in this environment. We were on trek from Likir to Khaltse in Ladakh, the starting point for which was the Likir village, an approximate 60 kms North West of Leh. An easy trek, one of the highlights was the homestays, across the villages we crossed en-route. The locals as always were very hospitable, warm and friendly. Almost every household has a room for ‘guests’. The kitchen doubles up as a living room, or maybe its the living room which doubles up as a kitchen, but either ways, that is the place where everyone gets together for meals and hot cuppa of butter tea. And when it snows heavily n the winters, the kitchen cum living room then also works as the bed room. The say the warmth of the kitchen fire is what makes this the coziest corner in the house. We believe that too.

In the pic: Home stay in Ladakh

India has its fair share of Tiger Reserves. India’s National Animal, the tiger happens to be a symbol of strength and speed. India boasts of two-dozen Tiger Reserves and sixty percent of the total population of the wild tigers in the world resides in India.

The Royal Bengal tiger has been a national symbol of India since about the 25th century BCE when it was displayed on the Pashupati seal of the Indus Valley Civilisation. With an unmatched aura of majesty and beauty, it has now been designated as the national animal of the country.

As said, “The tiger is the symbol of power, unbridled, elemental… And he lives alone, unblemished, unmarred. The more you know about him, the more he gets into your imagination.”

In the pic: The Royal Bengal Tiger

Relatively new in India, Rafting has been on the adventure tourism map for decades now! There is nothing quite like the ‘pure adrenaline rush’ one gets from riding foaming white water rapids. The rivers in the upper Himalayas are among the best in the world for the sport, with many staircase rapids that challenge the body and spirit of a river runner. Another white water sport that smacks of ingenuity & individuality is kayaking; this is a one-person sport requiring a big heart & great love for the water. We at Synapses Adventures offer rafting and kayaking expeditions for small and large groups and cover some of the most revered rivers of India.

In the pic: A run on the Tons river 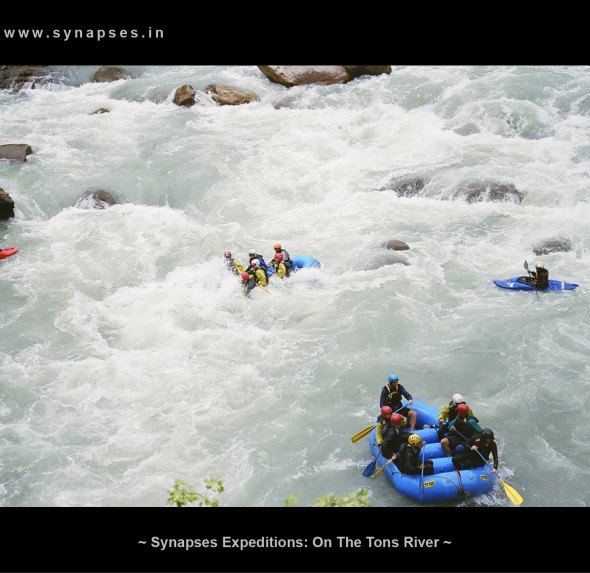 Ladakh – The Land of High Passes

Ladakh is a land like no other. Bound by two of the world’s mightiest mountain ranges, the Great Himalaya and the Karakoram, it is a high-altitude desert located at the western edge of the Tibetan plateau. Its awe-inspiring landscape has been modified and sculpted into its spectacular shape by wind and water over the millennia. The moon-like scenery is extraordinary: stark and barren but interspersed with isolated settlements of green oases full of swaying poplar trees, apricot orchards and cultivated farmland. Despite the rugged terrain and high altitude, the people of Ladakh exhibit a natural joie de vivre and their customs and lifestyle are a continuum from the past. Ladakh’s rich Buddhist heritage is on display at the numerous Gompas (Monasteries) that dominate the area. Perched high up in the mountain ridges, these enchanting medieval monasteries, surrounded by fluttering prayer flags, are still places of active worship and hold treasure troves of superb artifacts, images and ancient frescoes.

In the pic: The Lamayuru Monastery, one of the oldest monastery in Ladakh, situated at a height of 3,510 mts. 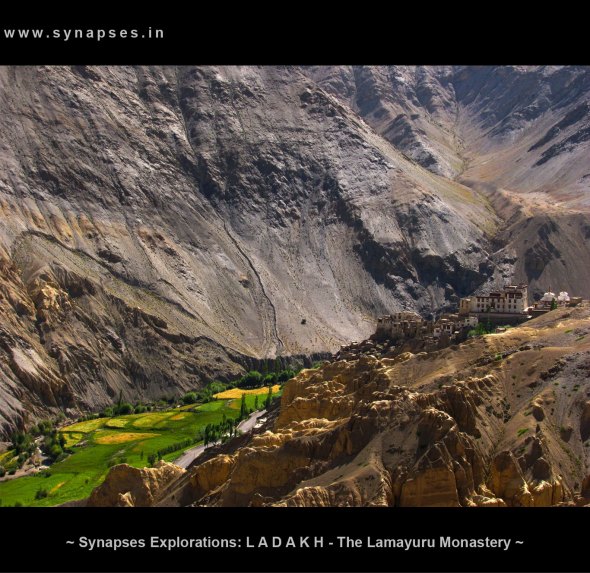 Legend of the  ‘Paanch Kedar’

As per the epic Indian mythology, the Mahabarata, the Pandavas defeated and killed their cousins — the Kauravas in the epic Kurukshetra war. They wished to atone for the sins of committing fratricide(gotra hatya) and Brāhmanahatya (killing of Brahmins — the priest class) during the war. Thus, they handed over the reigns of their kingdom to their kin and left in search of the god Shiva and to seek his blessings. First, they went to the holy city of Varanasi (Kashi), believed to Shiva’s favourite city and famous for its Shiva temple. But, Shiva wanted to avoid them as he was deeply incensed by the death and dishonesty at the Kurukshetra war and was, therefore, insensitive to Pandavas’ prayers. Therefore, he assumed the form of a bull (Nandi) and hid in the Garhwal region.

Not finding Shiva in Varanasi, the Pandavas went to Garhwal Himalayas. Bhima, the second of the five Pandava brothers, then standing astride two mountains started to look for Shiva. He saw a bull grazing near Guptakashi (“hidden Kashi” — the name derived from the hiding act of Shiva). Bhima immediately recognized the bull to be Shiva. Bhima caught hold of the bull by its tail and hind legs. But the bull-formed Shiva disappeared into the ground to later reappear in parts, with the hump raising in Kedarnath, the arms appearing in Tunganath, the nabhi (navel) and stomach surfacing in Madhyamaheshwar, the face showing up at Rudranath and the hair and the head appearing in Kalpeshwar. The Pandavas pleased with this reappearance in five different forms, built temples at the five places for venerating and worshipping Shiva. The Pandavas were thus freed from their sins.

The Tungnath temple is the highest of the ‘Paanch Kedar’

In the pic: The Tungnath Temple, on the Chopta Valley trail at an approximate height of 3,500 mts

The Kullu-Manali valley more or less runs along a perfect North-South line as per any given map. The eastern side of the valley is flanked by the CB range, while the western side is flanked by the Bara-Bangal range. The Saurkund Lake is on the western flank, high above Manali at a height of 13,000ft. The lake is snowed in for almost 4-5 months in a year, and is accessible from May to November depending on the weather conditions.

To reach it one has to trek for about 3 days from the nearest village called Sankchar. This village is probably one of the highest villages in Manali at 9,000ft. Sankchar and its neighboring villages are decked with acres and acres of apple orchards. A walk through them in August (the apple harvest season) is not complete without plucking juicy, crunchy green apples and sinking your teeth into them…bliss!

In the pic: The Saurkund Lake at an approximate height of 13,000 ft. 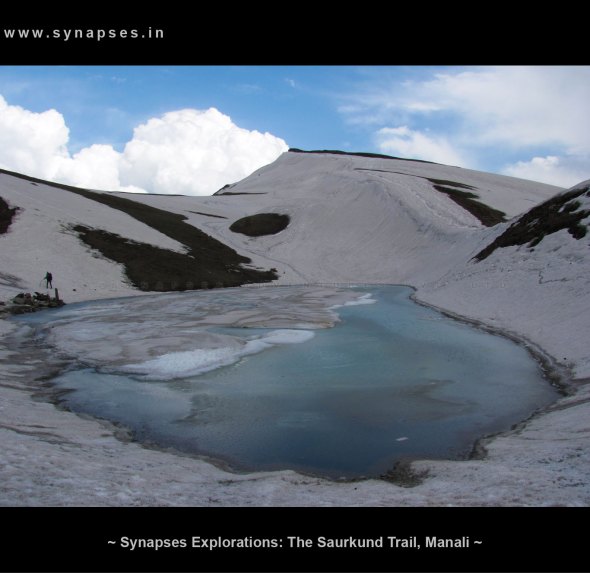